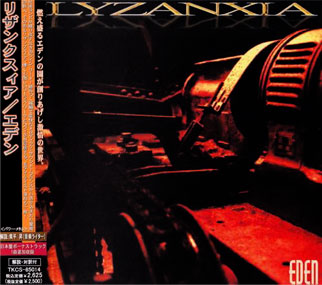 « Eden » was actually our truly first full-length album. After getting a great feedback from « Lullaby » in France, we firmly decided to record an album which would not have the weak points of « Lullaby » as far as production was concerned. So we contacted Fredrik Nordström and Don Romano 666. The recording took place for a full month at the Backstage studio in Lyon. Then we went to mix the album at Fredrik's Fredman Studio in Göteborg. And it's also in that Swedish city that we got to meet another exceptional person, Goran Finberg, who was the mastering guy of « Eden » ! The resulting sound seemed absolutely huge to us. Since this album enjoyed such a great production musically, we wanted the artwork to match it perfectly. Once we discovered the works from Alain Tréhard, we chose him unanimously to create the artwork of « Eden ».